Home » Blog » OCCA, the Installation of KHAS Architecture Students at Rezan Has Museum 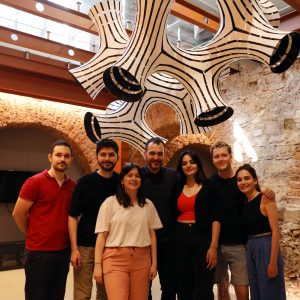 This installation project is the culmination of “Parametric Design: Minimal Tectonics” seminar completed during Spring 2022 academic term of Architecture program where research is completed in three stages. In the first stage, students conducted “form-finding” experiments using the soap film technique developed by Frei Otto in the 1960s and produced different minimal surfaces. In the second stage, the produced geometries were replicated and varied using parametric modeling tools. At the last stage, the selected design was fabricated using digital fabrication algorithms and produced from laser cut forex sheets and rivet joints.

The project situated within the contrasting historical context of the museum, takes its inspiration after Ferrea Occa (Glass Sponge), which creates four-legged intricate structural surfaces. Considered by some experts to be the longest living form in the world, these Hexactinellid sponges were studied and documented in 1904 by the German biologist Ernst Haeckel in Kunstformen der Natur (Artistic Forms of Nature). The design form combines two hedron geometries resembling sponges that are articulated by branches facing in different directions. The produced surface geometry is built by fixing black and white stripes running in opposite directions before being hanged from four points combined with steel ropes.

Kadir Has University's website uses cookies to provide an adequate user experience (Cookie Policy). You can view the Informative Text on the PPD Law (KVKK) within the scope of the law on protecting personal data here.
No, ThanksAccept
Manage consent

This website uses cookies to improve your experience while you navigate through the website. Out of these, the cookies that are categorized as necessary are stored on your browser as they are essential for the working of basic functionalities of the website. We also use third-party cookies that help us analyze and understand how you use this website. These cookies will be stored in your browser only with your consent. You also have the option to opt-out of these cookies. But opting out of some of these cookies may affect your browsing experience.
Necessary Always Enabled
Necessary cookies are absolutely essential for the website to function properly. This category only includes cookies that ensures basic functionalities and security features of the website. These cookies do not store any personal information.
Non-necessary
Any cookies that may not be particularly necessary for the website to function and is used specifically to collect user personal data via analytics, ads, other embedded contents are termed as non-necessary cookies. It is mandatory to procure user consent prior to running these cookies on your website.
SAVE & ACCEPT